On the Beelink GT-R we find a common element with the Minisforum machine, the Ryzen 5 R3550H. An AMD processor that deploys four cores and eight threads. The whole running from 2.1 to 3.7 GHz and associated with a Radeon Vega 8 chipset at 1.2 GHz. A robust solution that can run all the classic programs of a family PC: office, multimedia, image editing, light editing, 3D design and printing and even 2D and 3D gaming. This Ryzen 5 is not a monster of performance but it is more than enough for many uses and will be able, for example, to make FullHD video editing and launch recent 3D games with little detail. 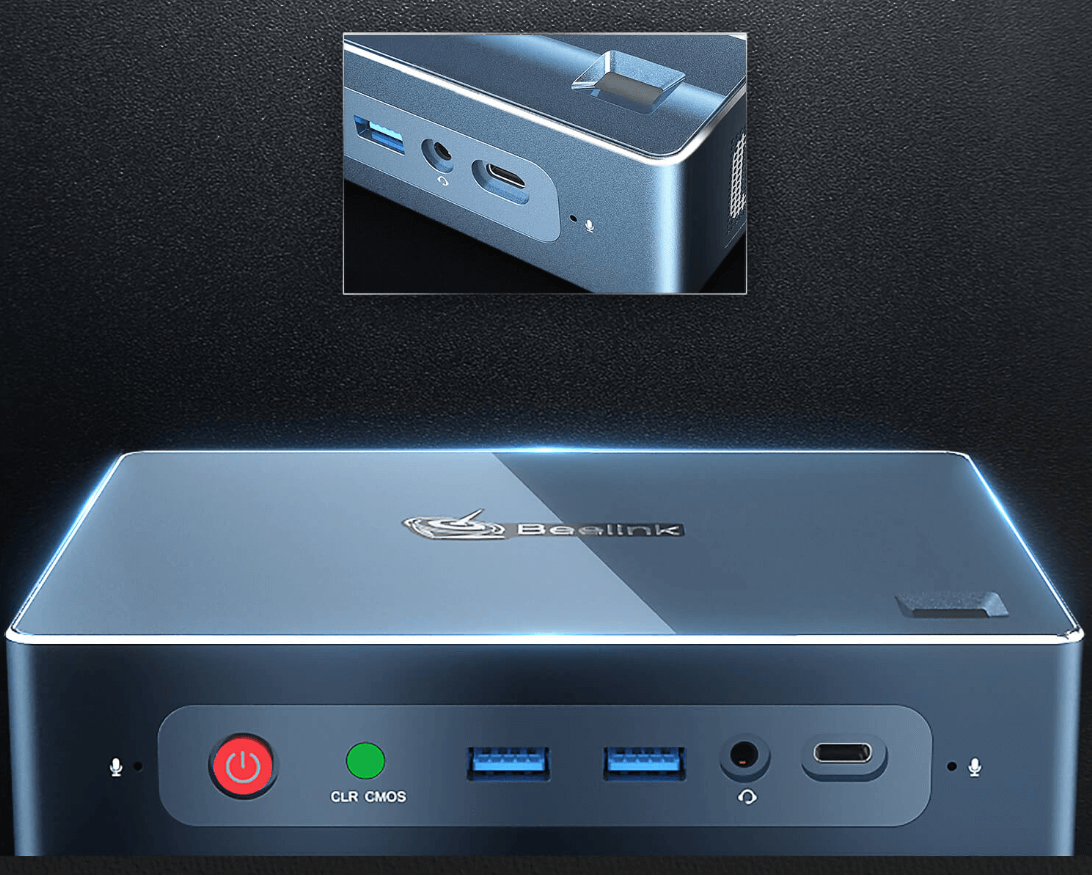 In the Beelink GT-R, this chip will be well surrounded. The brand will sell its MiniPC in several formats ranging from barebone, without memory or storage, to pre-equipped versions. The machine will offer two DDR4 RAM slots, which should allow it to drive at least 32 GB of RAM. Two slots in M.2 2280 format will also be available. The first will be PCIe NVMe compatible and the second will be limited to SATA 3.0. Finally, a 2.5-inch slot for additional SATA 3.0 storage will also be available. We will thus be able to drive 3 different storage solutions with this device.

The whole will be actively ventilated by a fairly complete solution including a copper heat pipe system and a double exhaust fan. A complete and fairly conventional system that pushes fresh air over fins to which the heat has been transported. So we will not have a fanless machine, but it is possible that the means used by the brand allow us to take advantage of a relatively discreet machine in terms of noise pollution. By the way, the cooling system is placed above the chassis and not below the motherboard, a positive point for the overall ventilation that will keep a processor cooler despite its 35 watts of TDP. 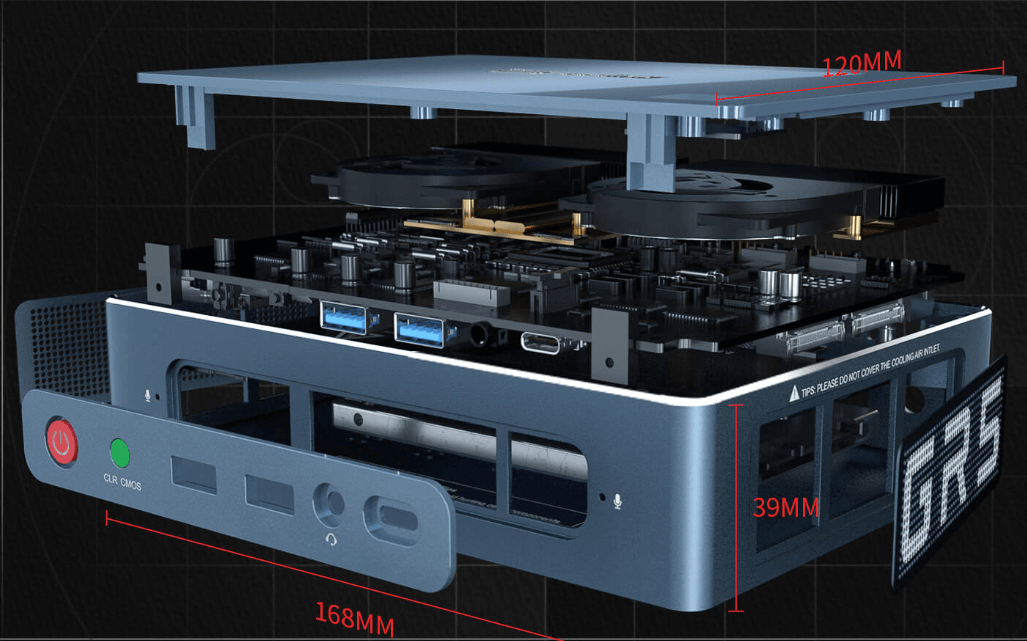 The Beelink GT-R’s housing itself will help dissipate the heat. With an aluminum shell, it will protect the whole machine while offering an original option for a MiniPC of this type. On top of the chassis, there is a fingerprint reader that will be able to drive an authentication and encryption system.

Connections are good with two USB 3.0 Type-A ports on the front panel, a USB Type-C, an audio jack port combining headset and microphone, and a dual microphone to drive a PDA solution. And, in addition to the start button, a reset button. I don’t think it’s a good solution to place this button that will restart the machine at this location. I imagine that some mistakes could be made and placing it on the back could be more secure than placing this type of button between the USB ports and the start button. It will probably be possible to disconnect it from the USB ports.

On the rear of the Beelink GT-R, you’ll find some very nice things with a classic jack power supply, two Gigabit Ethernet network ports which is great news for driving two separate networks with this type of device, a dual HDMI2.0 video output and a Displayport 1.4. All three ports will be capable of displaying content in UltraHD at 60 frames per second and HDR.

The front USB Type-C port is also DisplayPort-compatible, allowing four displays to be driven simultaneously with the unit. A point that could be of interest to certain professions. 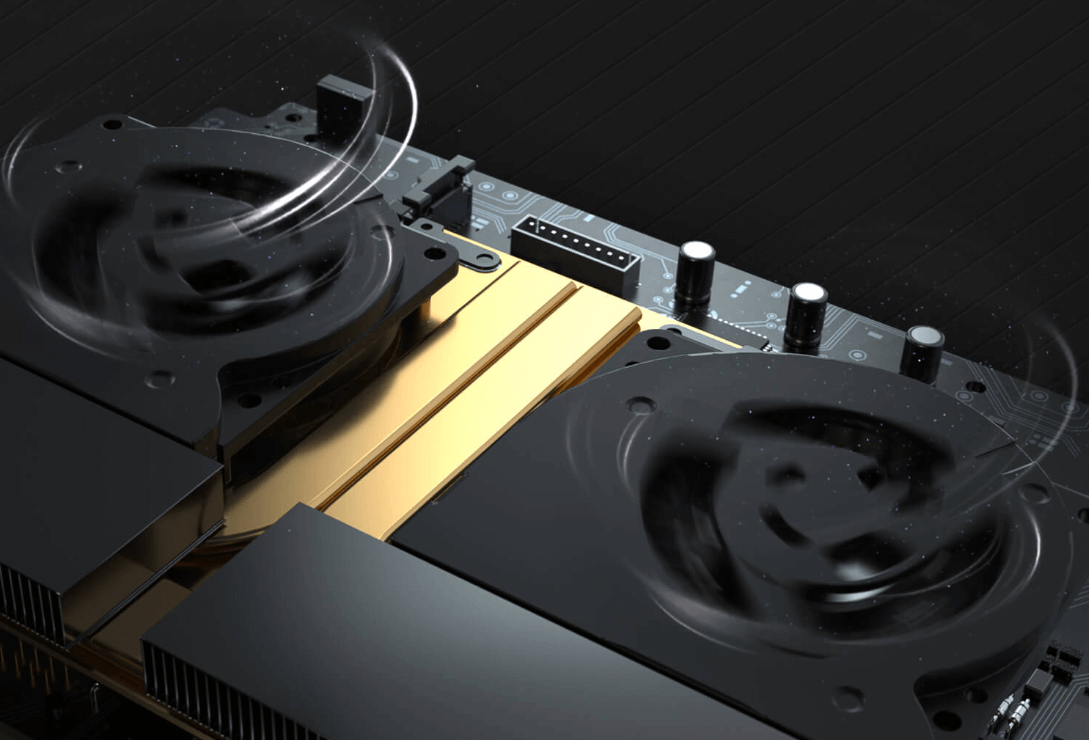 Finally, four other USB 3.0 ports are present for a total of 6 in all. Perfect once again to replace a classic tower with all the traditional accessories: from the webcam to the keyboard via a printer and joysticks. It may be missing a SDXC memory card reader which would not have been unpleasant but we can easily connect one in USB 3.0. The MiniPC obviously offers a Wifi5 and a Bluetooth 4.1 module to drive wireless systems.

The Beelink GT-R fits all this into a slightly larger than usual chassis with 16.8 cm wide by 12 cm deep and 3.9 cm thick. It remains very very compact and as the machine offers a VESA type mounting, it will be possible to fix it on a piece of furniture or behind a screen easily. 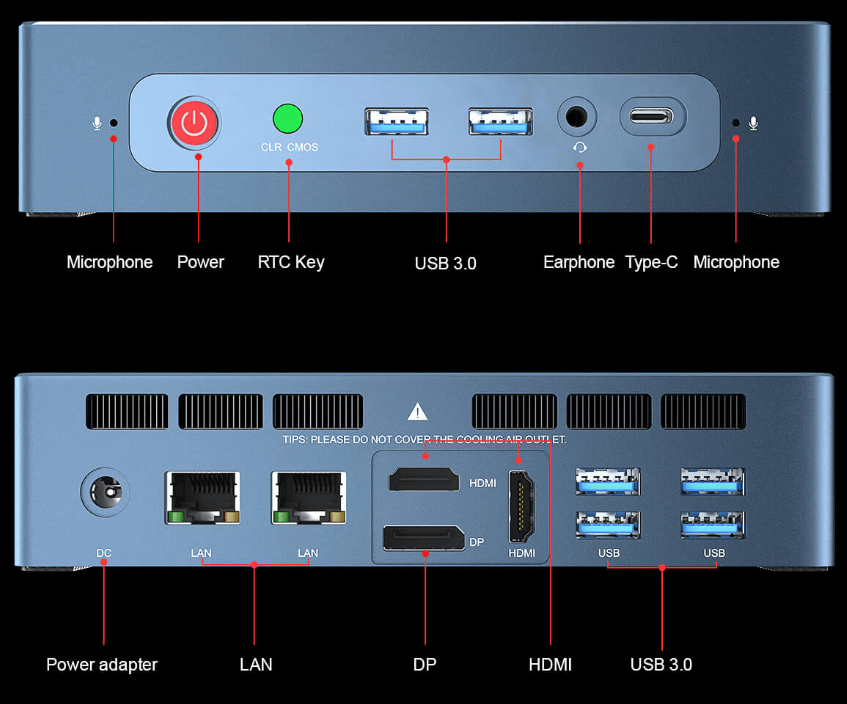 The Beelink GT-R is advertised as 100% Linux and Windows compatible and if we don’t know yet when it will be released or the prices asked by the brand, I’m convinced that this type of machine will turn the market upside down. More complete and more efficient, it won’t replace an Expert PC specialized in one use but will be perfect for a family use with very few things inaccessible in this perspective.

This is also why one should not rush into offers like the one of the Minisforum Deskmini DMAF5 in participatory financing. It is possible that this machine will be a better deal in the end and will benefit from traditional marketing. Just as it is possible that other manufacturers of this type will launch their own version of a MiniPC under Ryzen 5 and bring competition and prices into play.

Be the first to review “Beelink GT-R” Cancel reply