Blackview, a Chinese manufacturer known for their tough phones, will be having a sale on August 2 (until August 8) on Banggood to celebrate the launch of their new 5G smartphone, the BL5000, which they call “the world’s first 5G toughness gaming smartphone”. The BL5000 is said to be “The world’s first 5G toughness gaming smartphone” and comes with Bleckview’s signature “Toughness chassis” and gaming-friendly UI and features. The OS is Doke OS 2.1, a proprietary UI based on Android 11. there is no detailed information about Doke OS, but the BL5000 has a “game mode”.

The description says that in game mode, there are features to change some of the UI such as wallpaper, prevent accidental touches, block incoming phone calls, and block pop-ups (presumably to block notifications), but there was no description of performance-related items.

The CPU is a MediaTek Dimensity 700. We had previously reviewed a phone with the same CPU, the POCO M3 Pro 5G, and its Antutu Ver. 9 score was 330,303. It’s not a bad score, but it’s low for a gaming phone. RAM and storage are 8GB/128GB, which is not insanely large, but it is enough for everyday use, gaming, and outdoor use. 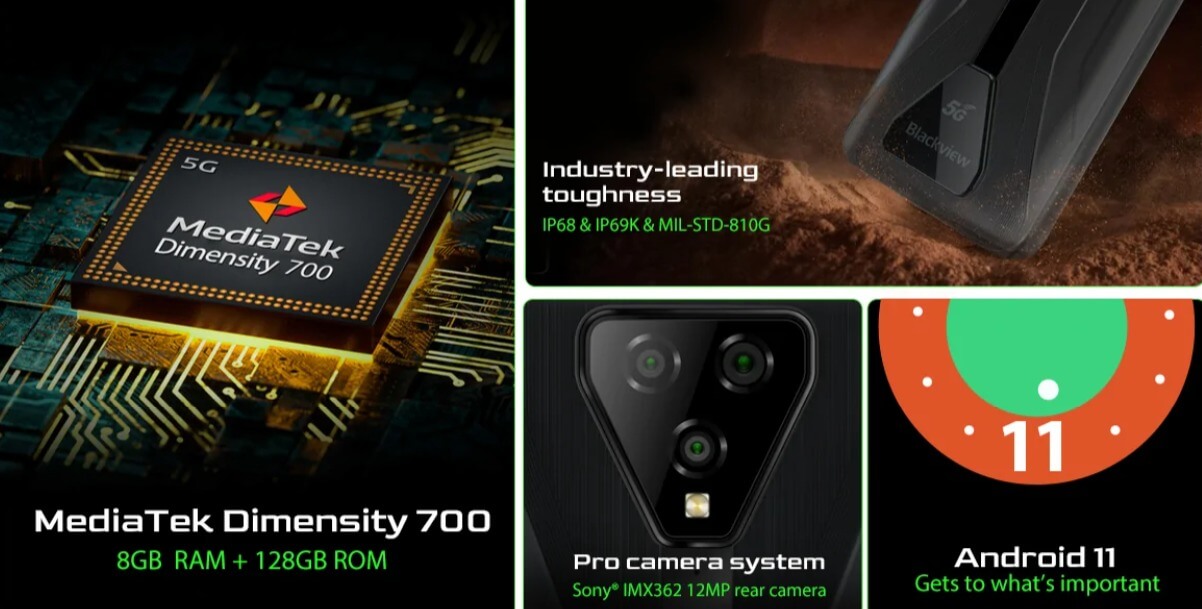 Another thing that is typical of a gaming smartphone is that it uses a liquid cooling system. Speaking of which, it’s been a hot day recently, and I was recording a video on my phone for the review when I thought, “The temperature is too high! You might not be able to record properly! I’ve been getting warnings from my beloved Google Pixel 5. Also, in the case of non-gaming notebooks, despite the high performance of the CPU and GPU, the heat generation measures are not sufficient, which can lead to erratic rendering during gaming. I don’t know how good this product’s liquid cooling system is, but the mere fact that it’s “liquid cooled” gives me some hope.

Although it is not that high performance as a gaming smartphone, the “other main business” of this product is “toughness smartphone”. I don’t think there is any doubt about the quality of Blackview’s products when it comes to toughness performance; they are IP68/IP69K waterproof and dustproof as well as MIL standard (MIL STD-810G) rugged.

Be the first to review “Blackview BL5000 5G” Cancel reply