BlitzWolf has recently expanded its portfolio with a new Bluetooth speaker, this time with a unique design. Even though there are two products in different price categories, BlitzWolf BW-AS4 reminds me of the transparent audio system from Harman & Kardon. Like this one, the portable speaker from BlitzWolf has the upper part made of a transparent plexiglass, launching to see some of the components inside, respectively the speaker.

We have the same cylindrical shape that I met with the BW-AS3 model, which always makes me think of the Apple HomePod. Probably because they were among the first to bring a speaker with this format on the market? 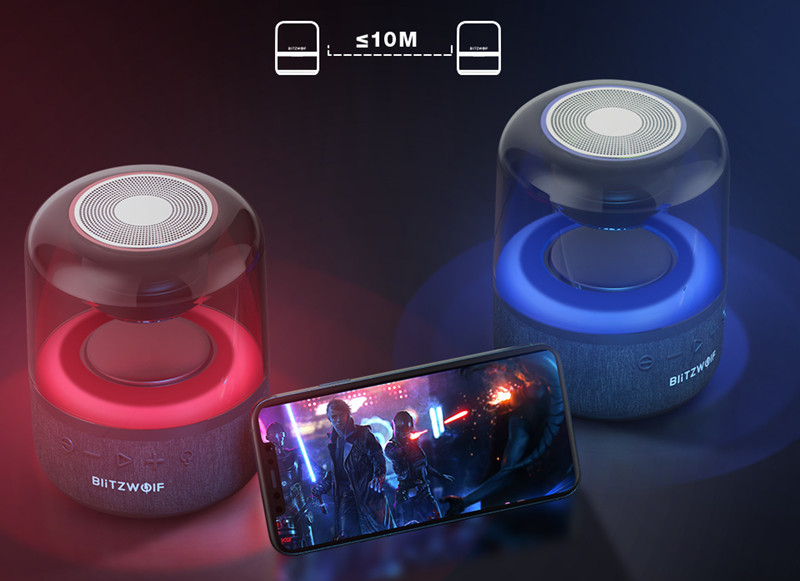 To take advantage of this transparent case, BlitzWolf has integrated a 360-degree LED strip inside for a bright show at night. Unfortunately, it is not specified whether the LEDs can be synchronized with music played via Bluetooth or whether the colors can be changed, but given the price, I do not expect such functions. Even so, during the night I think it can be used without problems and as a lamp.

Buttons that allow its control are present on the side, partly in front (even the close / open button). Due to its appearance, the speaker promises 360-degree sound and a maximum power of 20W. In terms of connectivity, it only has a Bluetooth function, which is not necessarily a bad thing, because so far I have not met anyone to connect such a speaker via cable. I can’t say the same about NFC or the fact that it can’t be used to answer calls.

In terms of autonomy, the speaker integrates a battery with a capacity of 2000mAh, which should provide up to 5 hours of use (probably at half volume). Fully charged in 4.5 hours. I just hope it uses USB-C for charging. Its features do not lack the TWS function, through which you can connect 2 speakers of the same kind, to create a stereo system.

Be the first to review “BlitzWolf® BW-AS4” Cancel reply