The BMAX Y13 Power YUGA uses the same codes that made the brand’s success in import. An ultraportable with a fine metal frame, quite elegant and with a very correct finish. It has the usual defects of this type of machine, namely a Qwerty keyboard and a one-year limited warranty. But this type of defect may be acceptable as long as other qualities and an attractive price are part of the equation.

One will appreciate the name of this limited edition machine: BMAX Y13 Power YUGA, not to say Yoga and not to risk the big eyes of a Lenovo that offers ultraportable ranges under this name. The brand has already released a rather good BMAX Y13 in the past under Celeron N4100 processor which looks like two drops of water to this model except that it does not offer the same type of processor. 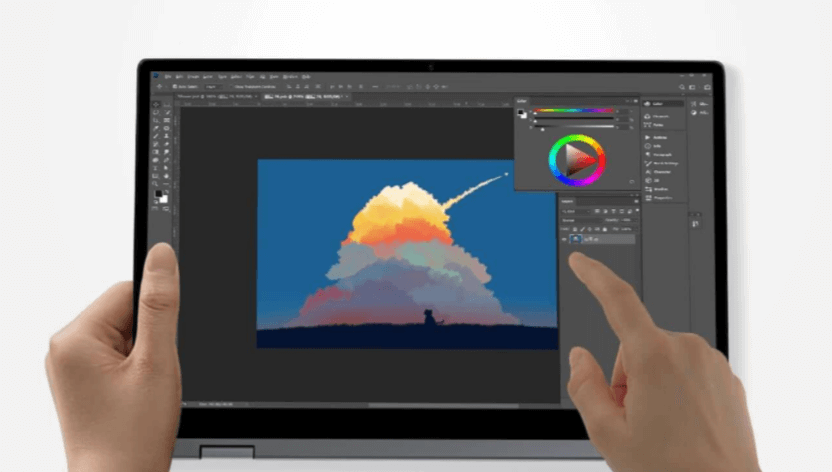 The BMAX Y13 Power Yuga is a rather interesting machine, it is not free of defects but the whole remains very correct on paper. Offered at 499.99 USD in import, it is a low-cost ultraportable with a rather classic recipe. It offers a 13.3″ IPS panel enclosed in a frame with thin borders of 5 mm wide, the screen occupies more than 80% of the available space. A recipe that works well and makes it easy to transport the 30.7 cm wide, 20.8 cm deep and 14.7 mm thick unit. It also offers a flexible hinge that unfolds over 360°.

This allows the BMAX Y13 Power YUGA to be used in tablet format with a very classic FullHD touch IPS panel that will still weigh 1.25 Kg. A detail to be taken into account with regard to this kind of use. If the tent mode or the flattening of the device can be widely considered. Carrying 1.25 Kg from one arm to the other is always quite tiring in the long run. The touch panel offers 10 simultaneous contact points but does not seem to take into account the active stylus.

It offers 8 GB of RAM, unfortunately soldered to the motherboard. This is a detail that can be widely tolerated on this type of machine, especially since the storage is mounted on an SSD in M.2 format. It is a 256GB not detailed by the brand, which probably translates a SATA model. If you don’t want an ultraportable that comes with “only” 8 GB of RAM, go ahead. There will be no possible evolution. 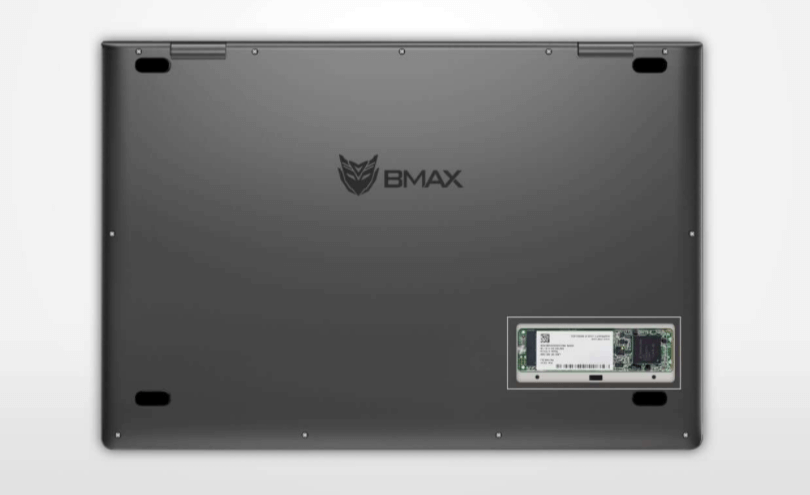 The processor used is quite rare, it is a Core M7-6Y75. A rather old chip since launched in the third quarter of 2015 by Intel … It is a dual core and quadruple threads Skylake generation clocked from 1.2 to 3.1 GHz with 4 MB of cache memory. I have nothing against this type of “old” chips, no real a priori. One of my everyday machine is a Xiaomi Notebook Air, a Core M3-6Y30 machine of the same generation with the same graphics circuit and 4Gb of RAM only. This machine, which I tested in 2018, still runs very well despite the age of its chip and its 4GB of RAM. Of course I don’t use it too much but you can refer to its test to determine its possibilities.

The computing capacities of this type of chip are not extraordinary but they are largely sufficient on this type of ultraportable. Whether for image editing, surfing, UltraHD video playback, office use or even gaming, these Core M Skylake chips offer excellent support for all types of activities.

The rest of the machine is quite classic for an ultraportable import. There’s a backlit QWERTY keyboard, a classic touchpad, a pair of stereo speakers and modern connectivity. Two USB Type-C ports to start with, the first one offers all the functionalities of this type of connector with USB and Gigabit Ethernet data transport, DisplayPort video signal and even recharging the machine despite the presence of a jack dedicated to this task. The second will only provide USB data transport. There is a 3.5 mm headphone port combining a microphone input and a MicroSDXC card reader. The start button is positioned on the edge to be easily operated in tablet mode.

The Wifi module is in 802.11AC format associated with a Bluetooth 4.2. The device also offers a 1MP webcam with microphones for video conferencing. The announced autonomy is 6 hours, which does not seem unrealistic for a device equipped with this type of processor. The BMAX Y13 Yuga seems to come with a Windows 10 license that can be activated online, I have no idea of its Linux compatibility. If my Xiaomi Notebook Air was perfectly recognized by Ubuntu, this might not be the case for this machine.