Dreame is now known for its high-quality cordless vacuum cleaners: With the Dreame V9, the manufacturer has managed to climb to the top of our cordless vacuum cleaner best list. And still the V9 is the best seller so to speak, combining all important features with a reasonable price. The Dreame T20, which is the subject of this test report, is now the fifth model from Dreame that has made it to us for a test. With a sales price of almost 300€, it is so to speak the luxury model among the battery vacuum cleaners of the manufacturer, which is shown among other things by an even higher suction power and a display. But is the extra charge worth it and can the Dreame T20 convince in practice?

Anyone who asks now how the T20 differs from its direct predecessor, the V11, is not wrong to ask. In fact, the T20 is an optimized version of the V11 – strong! 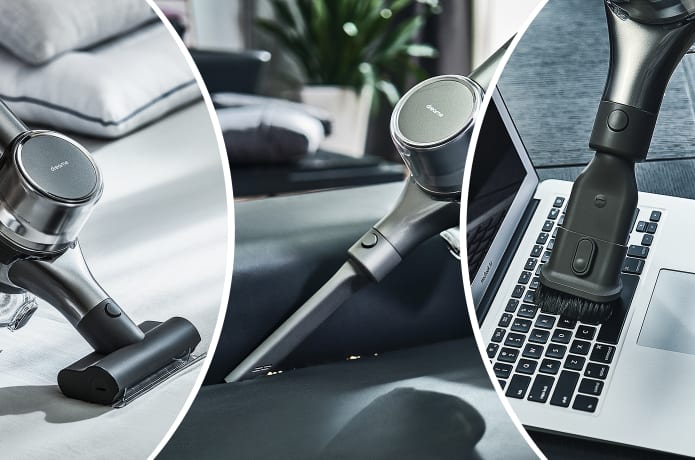 At first glance, you might think you are looking at V11, which was released only a few months earlier. Dreame has been doing it that way since day 1, they base their new models on predecessors. They have optimized suction power and cyclone technology, installed a display or improved their floor nozzle and roller. If the model on which the other models are based is well developed, this is a good strategy for all sides. And as of September 2020, it is a good system, also for consumers

The first point is also the most welcome one: a replaceable battery not only gives the device a longer life, but also allows its owner to charge another battery on the wall mount while using the device. Or both at the same time.

The floor nozzle has been optimized in such a way that it can detect via sensors on the underside what kind of surface it is on (hard floor or carpet) and automatically adjusts the suction level and thus the suction power. We know this type of detection from the Dyson V11 Absolute. The roller itself has also been modified and is now very reminiscent of the powerful Torque Drive of the Dyson top model. The design is to be specially designed so that long hair does not get caught in it so easily. 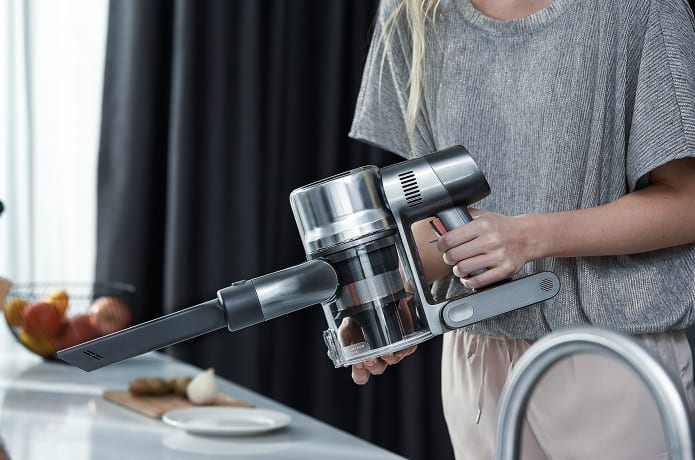 Praiseworthy Dreame, praiseworthy. Everything that was missing from the already very strong V11 and was criticized on a high level has now been implemented and optimized by Dreame. The step towards the replaceable battery is welcome from the consumer’s point of view, as Dyson also recognized a few months ago and many other manufacturers will still notice.

In October, Xiaomi’s subsidiary will send the new, so far strongest cordless vacuum cleaner model to the supporters of the crowdfunding campaign. It is not yet clear what the official launch price for the market release will then be. But since we are dealing with an upgrade of the V11, which costs about $300, I would estimate the Dreame T20 with exchangeable battery above $350 for us in this country. Accordingly, an early purchase of the model is much more comfortable for the wallet.

I see in this model a serious contender for the battery vacuum cleaner throne. What does Dreame himself say about the T20?

Be the first to review “Dreame T20” Cancel reply