The scooter has become the most interesting and avant-garde from the point of view of practicality and versatility. Its electric version is a completely ecological and environmentally friendly system that can be used in large and small cities without the problems of restricted traffic areas. The advantage of these means of transport, consists in the possibility to close it and transport it easily (like the model examined) and use it even in case of low battery, simply with a push and doing some healthy exercise.

The first impact is positive; the GRUNDIG X7 shows great solidity and a “Premium” appearance with a convincing choice of materials. Those who have never used an electric scooter may find it too heavy, but the weight of the GRUNDIG X7 is perfectly in line with that of the other electric scooters on the market. Much of its weight is due to the presence of a generous battery which we will talk about specifically in the paragraph below.

The lights are turned on for dark conditions by pressing the settings button twice. In the front part there is a powerful LED light and in the rear part a classic red light that provides the strongest illumination when using the brake (like in a scooter). The presence of good lighting, helps to make the use of the vehicle safe throughout the day.

To fold the GRUNDIG X7, you must unlock the hook (very stable) with which the main pole containing battery (and handlebars) is locked and hook it to the rear which has the housing for the lock. Very convenient the stand to support the scooter by tilting it (it can be used also when the vehicle is folded). It’s a pity that there is no simple way to attach a safety hook and discourage malicious people if we have to move away from the scooter. 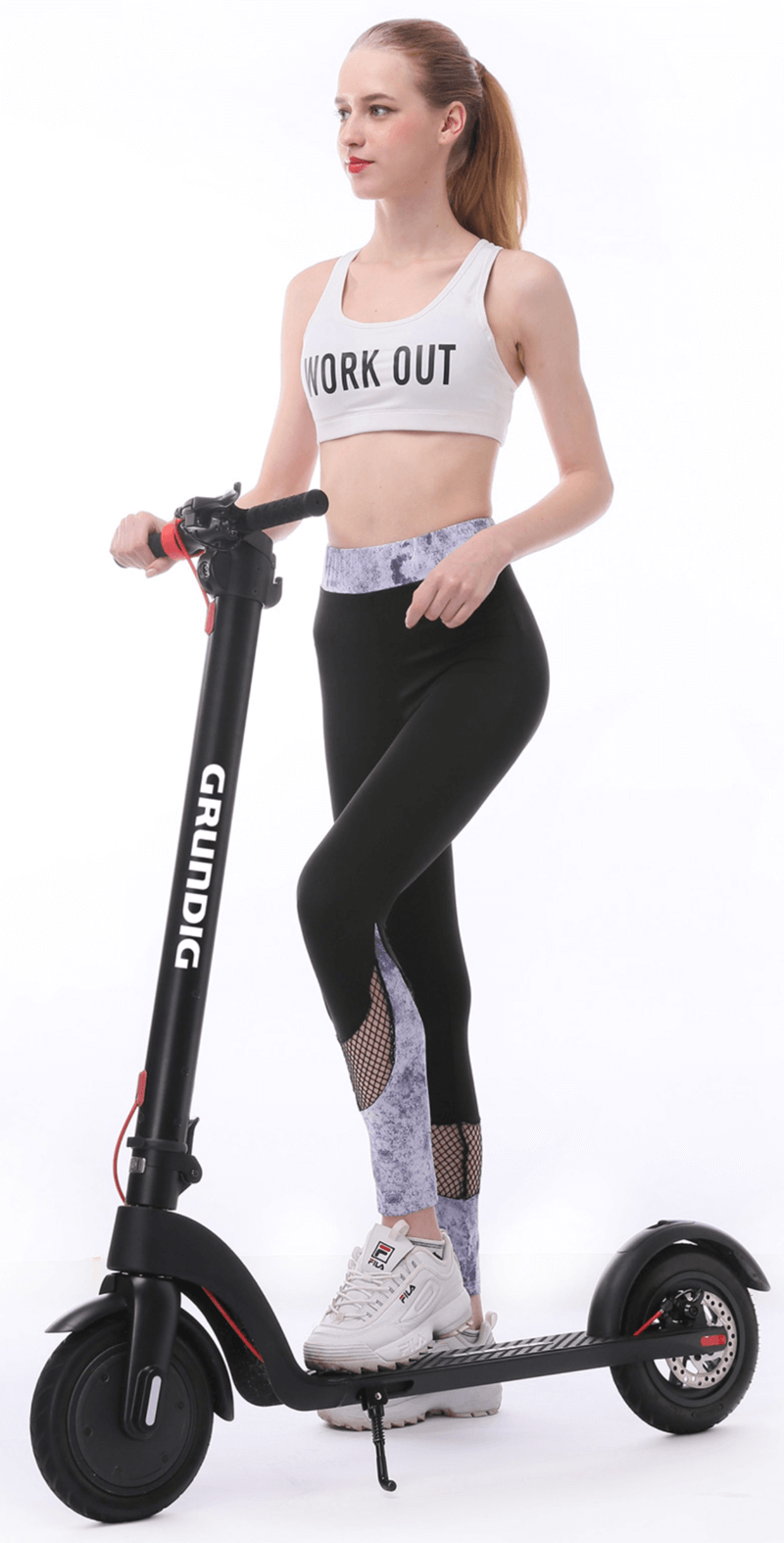 To start using the GRUNDIG X7, simply give yourself a light push with your foot and get over 3 Km/h and then operate the accelerator. The latter works by moving the red lever downwards and, if kept in position If the car is stopped for more than 6 seconds, the cruise control mode is activated, with which you can maintain a constant speed without touching anything. To exit this mode, simply press the brake or the accelerator again.

Our test lasted one month in the city of Milan, in the most diverse situations and conditions. We can immediately say that the GRUNDIG X7 is promoted with full marks. Tried by people from 70 to 90 kg, there were no differences in the comfort of use. Both for small trips and longer walks, the scooter has always proved to be easy to manoeuvre and very responsive.

The restart at the traffic lights when stationary (on the plain) and the stability of the wheels, allowed the scooter to circulate freely in cycle paths and sidewalks not too rough. The cruise control is excellent for long distances and it was even possible to hold an umbrella on rainy days and with the hand free from the accelerator.

Although we are in a metropolis where the movements can reach even 8-10 km per day, it was not necessary to get a second battery (which has a fairly high cost) and it was enough to leave the battery charged after a prolonged use to have the scooter ready for the next day.

Be the first to review “GRUNDIG X7” Cancel reply