Late last month, Ninebot launched a new electric scooter in China under the name Ninebot F25, an affordable model suitable for those who don’t need a long range but want the comfort of 10-inch wheels. While the Max G30 series models are still quite expensive, the Ninebot F25 becomes the cheapest electric scooter ever produced by Ninebot. The launch price in China is around $244, which is almost as much as the Ninebot ES1 costs. Let’s see what we get for that amount.

In terms of design, the Ninebot F25 seems to be a combination of Xiaomi’s famous M365 and Ninebot’s ES1/ES2. Somewhat natural considering Ninebot is now also owned by Xiaomi. For those who don’t know, the first electric scooter launched by Xiaomi was actually produced by Ninebot.

Instead we have large 10-inch wheels, which will provide extra comfort and safety while riding compared to Xiaomi’s 8.5-inch wheels. In addition, Ninebot mentions that the tires the scooter comes with are more resistant against rubber feathers. That remains to be seen. 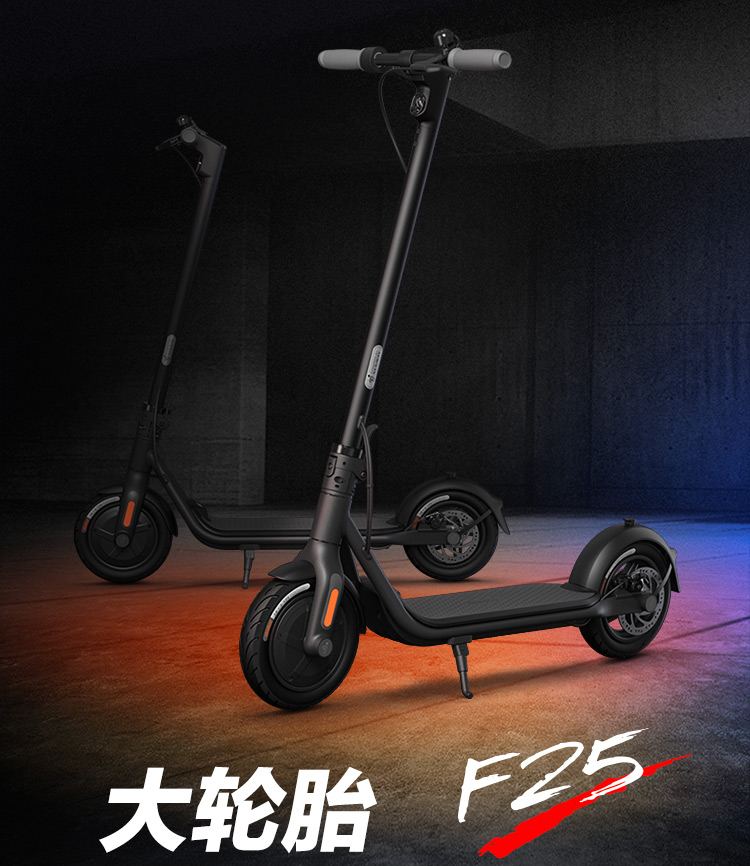 The screen present on the handlebars is almost identical to the one we find on Xiaomi scooters, it even uses the same icons, just a bit more rounded. The motor is 300W and the maximum speed it can reach is 25 km/h. It has 3 modes and the maximum range is 20 kilometers.

Obviously, range varies depending on weight, road and weather conditions. With a claimed range of 20 kilometres, it will probably be up to a maximum of 15 kilometres in normal use.

Unfortunately, the folding system is the same one we have on Xiaomi scooters, it has a disc brake on the rear wheel and LED headlight. It’s compatible with the Ninebot app, where information about the battery and its settings (autopilot, headlight, lock, etc) is available.

As mentioned at the beginning of this article, the Ninebot F25 is an electric scooter that is aimed at those who don’t have very long distances to cover. It’s ideal for the city, short distances, for a comfortable and safe experience. It weighs 14.7 kilograms and can support a maximum weight of 100 kilograms. The scooter is already available for sale in China on JD.com. I’m curious what its price will be when it shows up in Chinese store offerings, if at all.

Be the first to review “Ninebot F25” Cancel reply