OUKITEL, a Chinese manufacturer, is launching an “awesome toughness smartphone” WP15. What’s so great about it is the “battery”. It’s 15,600 mAh. But it’s no joke, it’s really coming out. With such a large capacity battery, the exterior is also “super thick”.

The camera specifications are also the same as the WP13, with a slightly lower resolution of 8MP on the in side and a triple lens including 48MP on the out side. We won’t know if the image quality is good or bad until we try out the actual device, but based on our experience of reviewing Chinese phones on Wintaub, we expect that it won’t be that high quality. Most Chinese smartphones don’t have good image quality for the number of pixels displayed (except for major manufacturers like Xiaomi and OPPO).

Well, when you put a 15,600 mAh battery in a smartphone, it’s only natural that it would last longer, but 1,300 hours (54 days) of standby time is like a whole new dimension.

Instead, the size is also amazing. It’s 23.8 mm thick and weighs 485 grams (three times as much as the Xiaomi Mi 11 Lite 5G). If you put it in the breast pocket of your shirt, the fabric will stretch.

The WP15 has features such as “Game Mode” and “App Freezer” (I think it’s a function to completely stop unused apps), and it can also be used as a Wi-Fi extender. This is unusual. I’m not sure of the details, but I’m sure the friends I’m with will appreciate this feature. 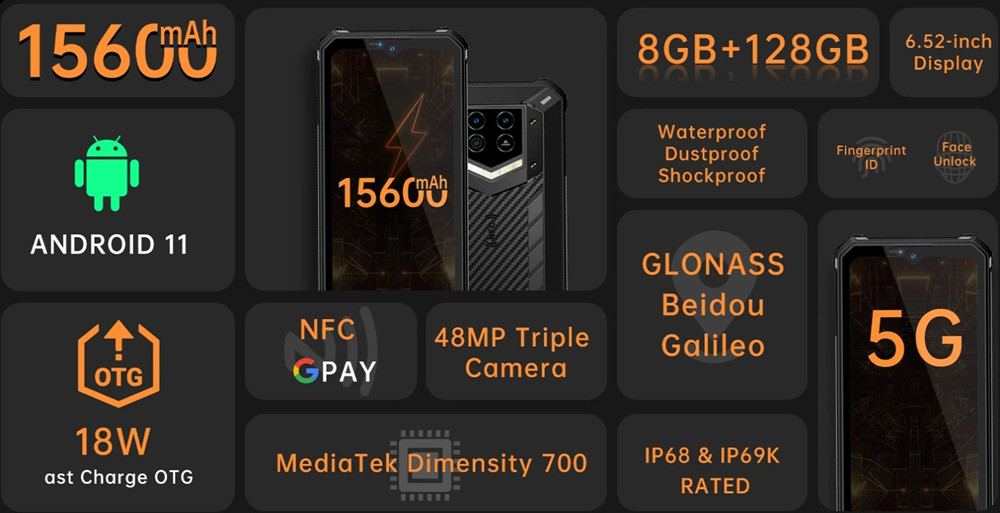 At this point, this is the only image that clearly shows the structure of the chassis. You can’t help but notice the “intense thickness”… On the left side, there are customization keys (buttons that allow users to assign their own operations), but the layout itself is rather orthodox. This product supports fingerprint and face recognition, so the power button on the right side probably doubles as a fingerprint sensor.

Be the first to review “Oukitel WP15” Cancel reply