If you just want to describe the newly released Umidigi Bison strapphone in headlines, we would not miss them: Full HD+ IPS display, Sony 48MP back camera, LTE modem with B20 support, 8-core Helio P60 processor, 128GB expandable storage, NFC or 5000 mAh battery with fast charging. All in an extremely rugged, brutally resistant enclosure that meets IP68, IP69K and MIL-STD-810G ratings, at a very friendly price.

The outer casing of the Umidigi Bison is made of polycarbonate and has a rugged, sleek design, so it will not only withstand water or dust to IP68 and IP69K ratings, but will also withstand drops and shocks, which is why the MIL-STD 810G military standard will provide the future owner. With a weight of 250 grams, the Umidigi Bison is not a slim piece at all, nor can it be called compact due to its dimensions of 162.5 x 79.9 x 12.8 mm, but this is perhaps not an expectation for a rugged phone. 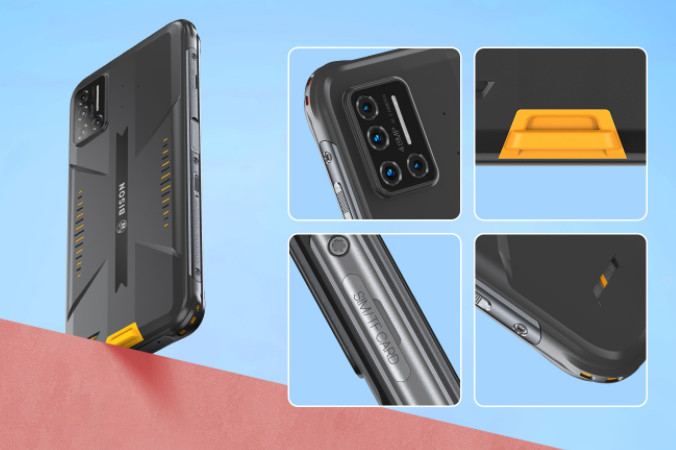 The Bison’s 6.3-inch screen is an IPS LCD panel with vibrant colors and great viewing angles, with a total of 2340 x 1080 pixels lined up. The display is protected against scratches and other external influences by a Corning Gorilla Glass coating, the manufacturer’s data sheet did not specify which generation it was. A drop-shaped notch on the top frame of the display houses the front camera. The mobile also has two customizable buttons, to which we assign a function that we want.

The soul of the Umidigi Bison is a MediaTek Helio P60 chipset with an 8-core processor and a Mali-G72 MP3 graphics accelerator, along with 6GB of RAM, which is bundled with 128GB of internal storage. It’s a very fair mid-range iron that can be perfectly suited to perform even more serious tasks, in fact, the game isn’t impossible either, albeit with some compromise. The smartphone works perfectly with two network cards, but we can only insert them into a hybrid socket, so expanding the storage space and taking advantage of the extra network options is unfortunately not possible at the same time, you have to decide which is more important.

Although Umidigi Bison does not yet support 5G networks, the 4G modem under its cover connects to all Hungarian telecommunications frequencies without any problems. The sensor that identifies the user based on their fingerprint has been placed on the side frame instead of the back cover this time, but the front panel camera also provides a basic level of face recognition if it suits us better. Among the specifications of the Umidigi Bison, Bluetooth 4.2, the two-channel Wi-Fi module, the navigation system capable of interpreting the signals of GPS, A-GPS, GLONASS, Galileo satellites, the NFC chip enabling mobile payments, the headset output, the mobile phones are definitely worth mentioning. FM radio, which is slowly being a protected animal species in the world, and a USB-C port that can be used for data transfer in addition to charging.

If the moment is to be captured, the Umidigi Bison will be surprisingly well-suited, thanks in part to a 48MP Sony IMX586 sensor on the back, which comes with a 16MP ultra-wide-angle image capture unit and a 5MP macro also next to a 5MP depth sensor. As a matter of fact, the front camera was also designed by the skulls of Japanese Sony, the module on the sensor island takes 24 megapixel photos.

Under the cover of the Umidigi Bison, a 5,000 mAh, non-replaceable lithium-polymer battery for home use is responsible for powering the hardware components. The battery inside the robust device absorbs the lost voltage via a Type-C connector, and fast charging of 18 watts is also supported. The rugged smartphone runs Android 10 with a sleek, factory-built interface, as Google dreamed of.