A budget-friendly compact projector with decent features, good brightness and performance that makes a perfect tandem with a modern Android set-top box. It’s not too costly for its user.

The projector can be found in two colors: black and white. The case is assembled from fairly high quality plastic, with no backlashes or creaks when pressing. Due to the modest size, the device can be easily carried around with the purchase of a special bag for transporting projectors. On the front side there are optics and IR port window for remote control. There are physical control keys on the top side. On the right side and the rear of the connection ports. Also on the edges are two built-in speakers of 5W each.

The optimum recommended projection distance for the WZATCO E600 starts at 2.5-3 meters. It is at this distance to the projection area that you can get a clear and comfortable image up to 100 inches in size. 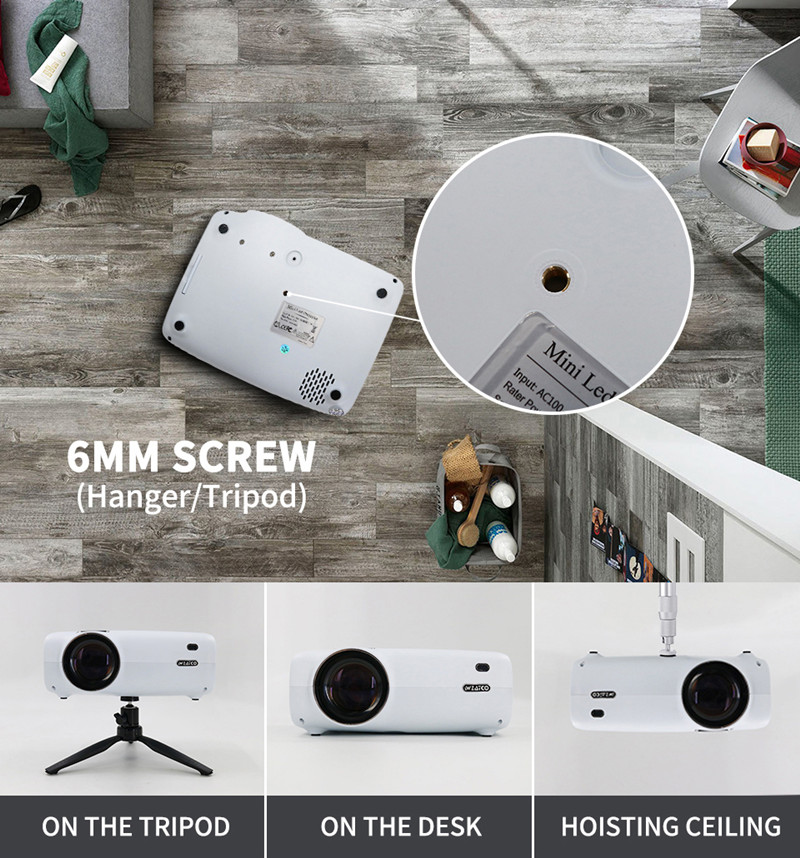 The projector is designed to work in total darkness, preferably in tandem with a projection screen. When you start up, you’re greeted by a standard control and settings menu with icons for adjusting image, sound, and general projector settings. Thanks to a variety of ports the E600 can work together with a computer or TV set-top box via HDMI cable or play content directly from a USB flash drive. Some models of personal computers can also be connected via VGA. But in terms of speed and quality of signal transmission, the HDMI connection will win, especially if you use a high-quality HDMI cable like this one. A wireless connection, alas, is only possible with a connection to a third-party device that has WIFI and Bluetooth support. The WZATCO E600 itself does not have such an extravagance.

A nice feature of the E600 is its extremely quiet operation, up to 30dB at peak load. The projector produces a rich and contrasty picture with a quality black transfer, which, considering its cost, is commendable. Even in solo mode, without connecting third-party devices, the projector does a great job of playing back and decoding content in high quality. However, when you play some video formats directly from the projector some problems with sound can be observed, you can read more about their solution in our review here. Having relatively low projection latency, the device can be used for gaming by connecting it to a personal computer. The E600 projector is extremely easy to use and with proper care and moderate use will last its user for a long time. For example, the manufacturer promises a service life of up to 50,000 hours without changing any components. The reviews of users who have already bought the projector are positive, most often they noted an attractive price and the quality of the image. By the way, the built-in speaker system, which consists of two speakers, also successfully copes with their tasks. On the whole, the projector E600 has a strong position in the niche of budget devices of the initial class, and it will be perfect for the first acquaintance with the world of projectors. Or as an educational multimedia device for home or cottage use.

Be the first to review “WZATCO E600” Cancel reply