I’ve been looking for the ideal projector for a long time. Unfortunately, I haven’t found anything that is affordable and knows everything I want to this day. Today, however, the new BlitzWolf® BW-VP9 LCD projector have become the ideal candidate!

What are my expectations for a projector? Have high brightness, good contrast, and minimum FHD resolution. Have Android on it, get as smart as possible, have Bluetooth, and of course have Wi-Fi. If possible, it should have strong hardware, at least 2GB of memory next to Android, so that you can play on it. Don’t worry if I send 4K material to it, although obviously only 1080P is the native resolution, but I can still play 4K without a hitch. Have plenty of connectors, megeye without the hassle of external hard drives as well. And most importantly, you need four-way keystone correction!

The latter is important because most affordable projectors only have vertical keystone correction. This is a problem because these projectors must be placed opposite the projected wall, perpendicular to the surface. It can be directed up or down, which can correct image distortion. But not all apartments have the option of having the projector directly against the wall, nor do we have it, so the image is distorted without horizontal keystone correction. 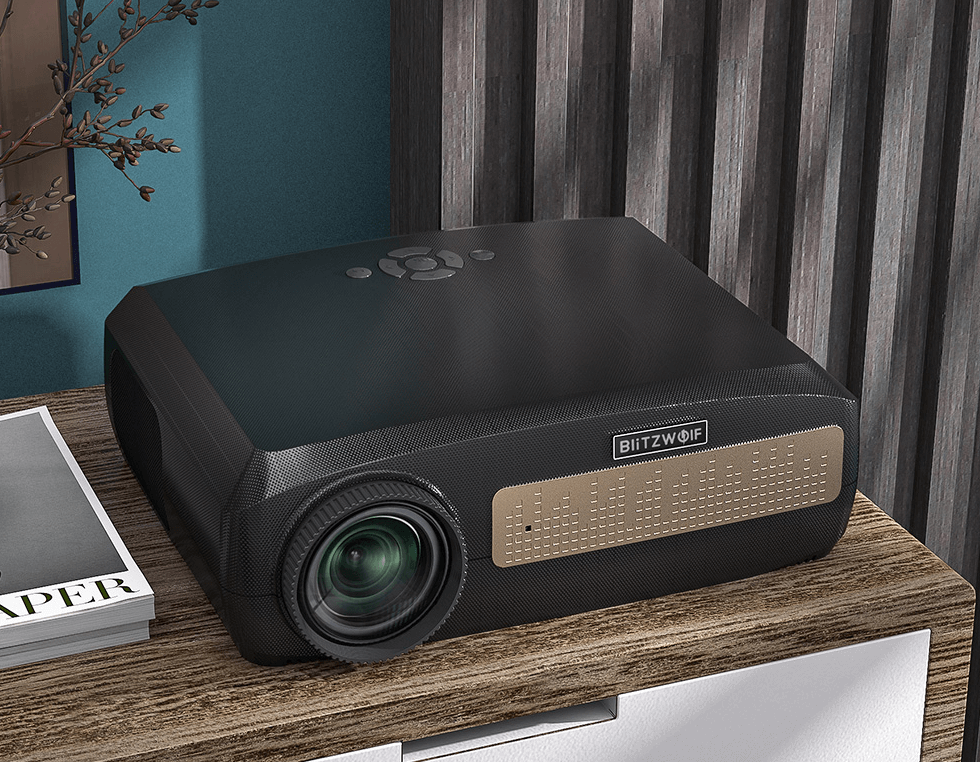 Well, I got a tip on Banggood today, I checked it out and it turned out that soon there will be a machine in the stores that will satisfy all my above needs and that will be none other than Blitzwolf’s new projector, the BW-VP9! I’ve watched a lot of videos and tests about Blitzwolf projectors and so far I’ve always liked what I’ve seen, I hope VP9 will be like this too!

This machine really knows everything! With 6,500 limes of brightness and native FHD resolution, it eats not only 4K but also 8K content. Up to 5 meters projection distance and 200 inches diagonal. 4-way keystone correction, 2000: 1 contrast ratio, dual-channel Wi-Fi and Bluetooth, and the system installed on it is not something made of Android, but Android TV like Xiaomi devices, with voice-based control, Netflix and Youtube support, of course.

Quad-core processor, 2GB of memory and 16GB of built-in storage, 2 USBs, one AV, two HDMI, one Ethernet connector and a Bluetooth remote control. The only thing missing from it is maybe the autofocus, but you can live with that deficiency in abundance.

The bottom line is that this machine is really prepared for anything. The built-in Android TV system makes it convenient to use, even if this is where Netflix can come without any gimmicks and mirrors. The brightness can be enough even during the day, of course, in the absence of scorching sunshine, due to the 4-way keystone correction, I can even project from the corner of the room.

I don’t know yet how much the exact price will be, but if you can believe the rumors, the amount to be paid will remain somewhere in the range of $200-300. This will be very good even if it is around $300, but if it stays below, we can specifically put the machine in the gift category. Unfortunately, I don’t know the exact date of the release yet, but I’m sure if it appears, I’ll be among the first to tap into the Blitzwolf BW-VP9 in Banggood!

Be the first to review “BlitzWolf® BW-VP9” Cancel reply