As the name suggests, LEMFO LEM14 is the successor to the LEMFO model of this manufacturer, which appeared on the market in September 2019. However, the new version of the smartwatch differs from its predecessor almost everything except the name, and what is more, it introduces solutions that have not been common on the wearables market before. What is it about?

In the new model under the LEMFO brand name you will find a lot of innovations that are driven by the eight-core Mediatek Helio P22 processor and as much as 4 GB of RAM and 64 GB of ROM, which allows you to run online 3D games and play various movies smoothly from your wrist. It is worth noting that this is the first processor as advanced as the one placed in the smartphone. The hardware works on Android 10 and offers the so-called dark theme.

This is not the end of the system tastes. The LEMFO model also got a phenomenal battery of 1600 mAh – let’s recall that in the previous version of the device it was 1260 mAh. What does this mean in practice? About as much as it will take up to 3 hours to recharge the watch. On one charge, however, the smart watch can last up to 3 days, which is a really good result with the offered spectrum of functionality. 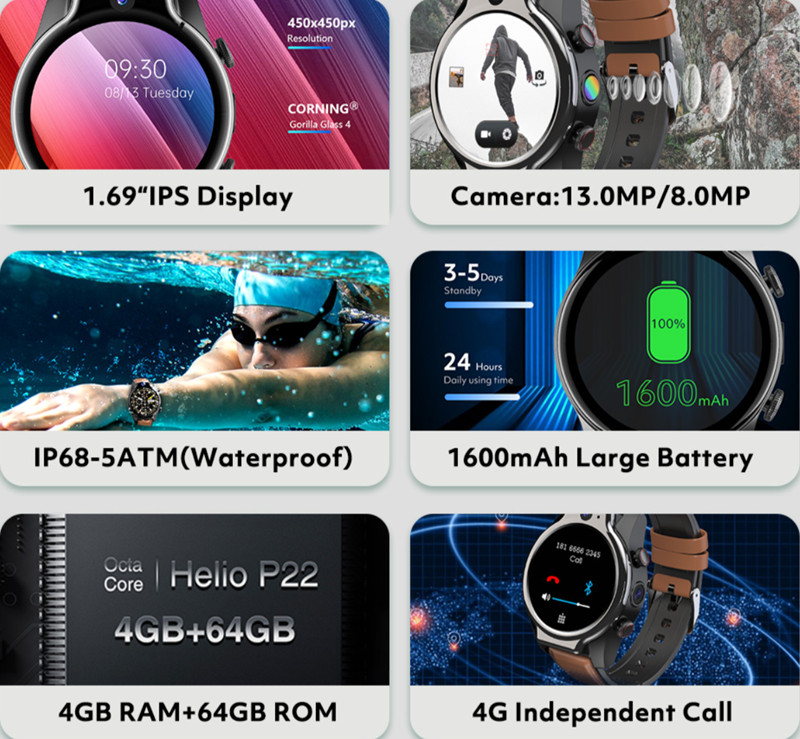 Particularly noteworthy in the new intelligent LEMFO watch is the Retina IPS screen, which boasts large dimensions – its diameter is an impressive 1.69 inches, which translates into a resolution of 450×450 pixels. The display in the LEMFO LEM14 model is round and surrounded by a ceramic frame. This makes the smartwatch quite massive and weighs 285 grams, which may suggest that it is more suitable for male than female wrists.

Interestingly, this unique smartwatch also received a rotating 13MP camera module. After starting, the camera rotates 90 degrees to take pictures, record videos during exercises or video calls. In addition, it also allows to unlock the device with a face.

Unfortunately, despite many advantages, this model lacks the NFC module, which provides proximity payments. We can also not count on its water resistance, but with a rotating photo module, which requires a specific construction, you can understand it.

Be the first to review “LEMFO LEM14” Cancel reply