This particular Smartband, continues to be small enough, not to reach the volume of a watch, but with a 1.91 inch screen, which is 80% larger than the usual Smartbands, you certainly do not call it distinctive.

The front is dominated by a curved IPS screen 1.91 inch with a resolution of 170 x 320 pixels and 3D glass coverage. The whole construction is resistant to water and dust, and certified with IP68 rating, so in most cases, even at sea, its use will not be a problem, as long as you do not overdo it and rinse well afterwards.

Its strap is made entirely of TPU, and can NOT be removed, so you live and die with it, with your color choices being enough, as you can find it in black, dark black, light black, black Bukurai and black, like the snake that ate you. On the back of the equally curved back of the Ticwris GTX you will find an optical heart rate sensor, as well as the Pogo pins attached to its magnetic charger. 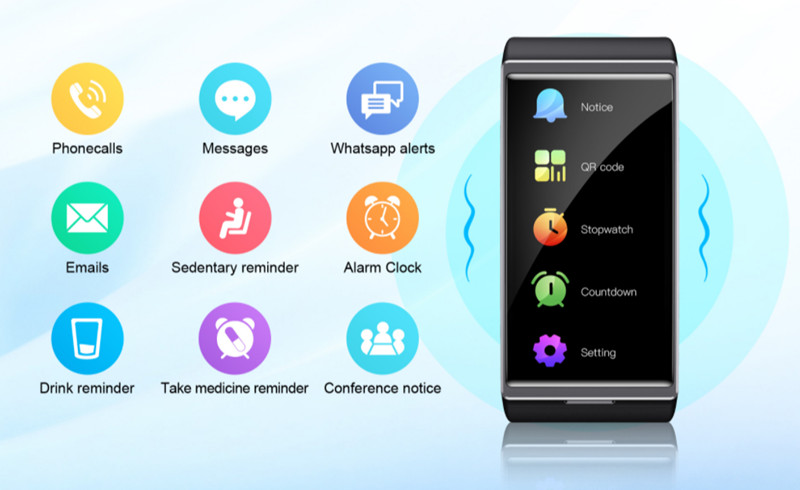 With its help, you charge the 300mAh battery that you will find in the GTX, which offers around 10 days of use according to Ticwris, so a week in fact, and it takes about 2 hours for a full charge.

In addition to heart rate and steps, the Ticwris GTX also records your sleep, while it has 9 different Sport Modes, to record your performance in this area as well.

Built-in, you’ll find a Bluetooth 5.0 antenna that, in conjunction with the F Fit app, lets you sync GTX with your phone (Android 5.1 or higher, or iOS 9.0 or higher) to transfer alerts, calls and messages with Ticwris watch has some more smart features like reminders to drink water or take your pills.

There is also the classic question mark of these devices, since we have no idea if the Ticwris GTX supports Greek in the notifications (in the menus, do not even expect it, it is excluded) and although it is normal to want to know such an important detail before buying, the My answer is clear. I have no idea.

Be the first to review “TICWRIS GTX” Cancel reply