The Topton D3 is not the first MiniPC of this type, at the beginning of April, Minisforum announced its HM50 on the same platform. It is also this chip that is at the controls of the mobile console Aya Neo. With 6 cores and 6 threads running between 2.3 and 4 GHz supported by a Radeon Vega 6, it is a solution that works in a TDP of 15 watts perfectly suited to small chassis. Topton has already offered several MiniPCs with various processors in the past. Like a model with Ryzen 7 4800H or a Core i9-10885H.

And the Topton D3 is small, 13.3 cm in depth as well as width, 5 cm in height. If it is not the most compact on the market, it will remain very discreet on a desk compared to a classic solution much more cumbersome. The device will offer a very good performance ratio with various capacities depending on the components you choose. The machine is proposed in barebone but can also be sold fully equipped. In this case, you can choose a storage ranging from 128 GB to 3 TB. With technical variants since the basic storage will be an SSD M.2 2280 PCIe NVMe going up to 1 TB and seconded by a mechanical disk 2.5″ from 1 to 2 TB. The RAM, mounted on two SoDIMM DDR4 slots, will be able to evolve from 8 to 64 GB. 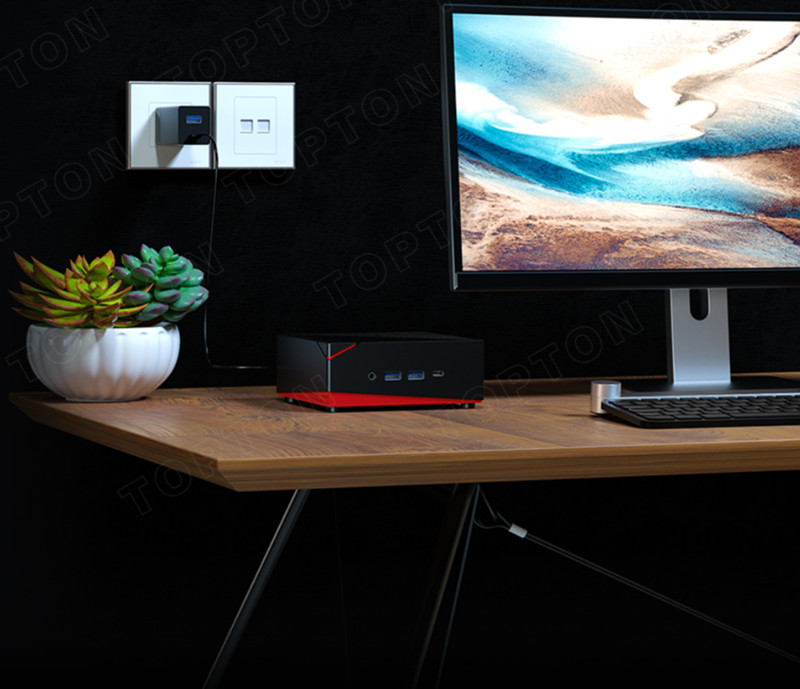 There is also an optional Intel AX200 Wifi6 module offering Bluetooth 5.1 and classic connectivity for this type of device: an HDMI 2.0 output, a DisplayPort and a USB Type-C port offering video support. These three displays can be used simultaneously to drive 3 UltraHD screens. Two Gigabit Ethernet ports are also present. Finally, there are two USB 3.0 ports and a USB 2.0 port in addition to the USB 3.1 Type-C port mentioned above. Note, on the rear part a USB Type-C port used only to power the device via an external charger GaN 65 watts ultra compact.

The Topton D3 has some interesting and quite rare features on this type of machine. Features that make me think of a semi-industrial platform development that ended up being recovered to develop this motherboard. The machine offers an automatic resumption of its operation in case of power failure but also a Wake-on-Lan function and even a PXE management to boot on a remote system image. The machine is obviously actively ventilated but we can expect a correct management of the fan speed and therefore little noise in practice.

Who is it for? What for? This type of device is – frankly – capable of doing what 99% of people ask of a traditional PC: Office work, online surfing, small 2D and 3D creation such as video editing, programming and low-energy games. It won’t be a professional machine in the sense that it doesn’t seem relevant to entrust an activity that will be economically important to a machine of this type. But if you do some photo editing from time to time, if you do some small editing or if your gaming experience is more oriented towards low-end games or retro titles, the Topton D3 will be perfectly sufficient for all these jobs.

Be the first to review “TOPTON D3” Cancel reply